What is it and how is it funded?

The purpose of the Scheme is to increase the speed of deployment of gigabit capables within the UK by providing micro-grants to support the cost of new connectivity.

The government are targeting “hard to reach” locations where without some form of public support suppliers will not be able to build gigabit capable networks. Vouchers are the mechanism the Scheme uses to provide these grants.

Vouchers may only be used to fund the actually incurred cost of providing new gigabit capable broadband connectivity.

Using their voucher, beneficiaries contract with registered suppliers such as Cambridge Fibre for a new gigabit-capable solution under a “Project” which the supplier has registered for a town or village.

These Projects must be registered separately with DCMS by suppliers using the “Project Application”. There is no mechanism by which a grant may be obtained by a beneficiary other than as part of a Project.

Payments of the grants to eligible beneficiaries under the Scheme are made by DCMS direct to registered suppliers, once they have confirmed that new connections have been delivered and the beneficiary has accepted service.

Who qualifies for these vouchers?

Home and businesses in rural locations which meet the following criteria can use vouchers to support the cost of installing new gigabit-capable connections when part of a group project.

How does the scheme operate? 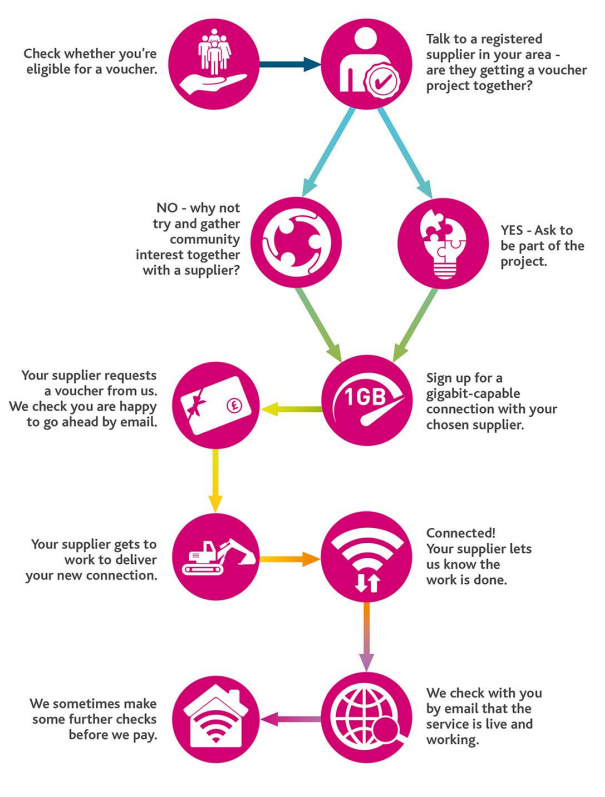 available with support from DCMS

If there are businesses and other residents in your area who want to install a gigabit capable connection you may be able to benefit from a voucher as part of  one of our registered projects. Cambridge Fibre did most of the hard work and has set-up projects in a number of villages which you can join. If you are outside our current planned areas we might still be able to connect you if you team up with local businesses and other residents. As the network grows we will update the project page at cambridgefibre.uk/projects/

To benefit as a home user from a voucher, you must be part of a project. As part of this project, you are able to combine the values of your vouchers.

Full fibre networks such as Cambridge Fibre are the future and getting ready for a gigabit speed is a key step for most businesses.

If you are a small or medium sized enterprise, you may be able to get a gigabit voucher worth up to £2,500 to upgrade your business broadband to a fast and reliable connection over gigabit capable infrastructure.

If you are interested in receiving a voucher please check if Cambridge Fibre is expected in your area.

You can boost your voucher value by joining together with other businesses and residential customers. Once you have a group of other users in your area Cambridge Fibre may be able to pool your vouchers together to subsidise the cost of installing a connection.

Are you eligible for a business voucher?  The SME criteria are:

Note that you can apply for multiple connections at multiple locations

Step-by-step how the vouchers work:

We believe the future is light and everybody should have access to hyperspeed or “gig” broadband over quality fibre.

Email me the newsletter